Preamble
In a Zoom conferencing session held last March 9, AIM BLICR fellows presented their field reports on their coastal communities’ climate situation. Here is a quick recap of what they have shared during the session. 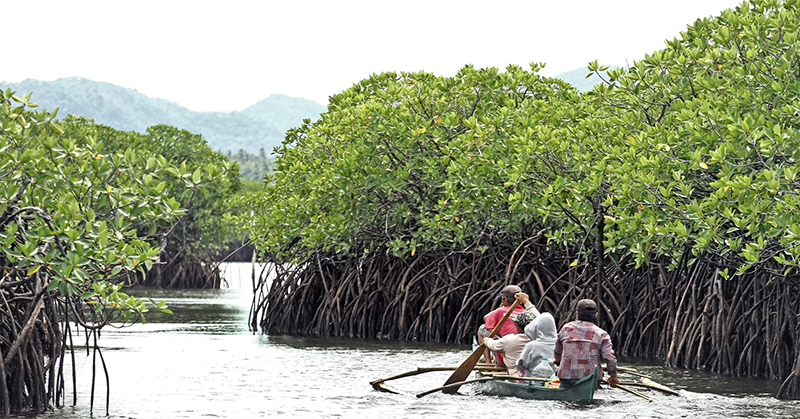 Following the wrap-up of the Convening Workshop held from October to November last year, Mayors and Sustainability and Corporate Social Responsibility (CSR) Professionals from the Asian Institute of Management (AIM) Bridging Leaders’ Initiative for Climate Resilience (BLICR) Fellowship Program embarked on a journey of assessing their coastal communities’ climate situation.

This is in preparation for their launch of Ecosystem-based Adaptation (EbA) projects that are envisioned to generate green jobs and sustainable livelihoods in their communities. The BLICR Program is the AIM TeaM Energy Center for Bridging Leadership’s (TEC-BL) pioneering fellowship that seeks to foster partnerships between the government and the business sector in working towards a green COVID-19 economic recovery. It is supported by Earth Security, UK through funding from the German government and TeaM Energy Foundation, Inc.

In a Zoom conferencing session held last March 9, the fellows presented the results from their field assessment. Here is a quick recap of what they have shared during the session.

Composed of 31 islands and islets spread at the Sulu Sea, Cagayancillo has political jurisdiction over the Tubbataha Reefs National Park (TRNP) and 8 other Marine Protected Areas (MPAs) covering a total of 464.04 hectares.

Mayor Sergio Tapalla and Ms. Maria Pamela Castro of the Pilipinas Shell Foundation Inc. found in a survey of 196 respondents that improper waste disposal, illegal fishing, and the use of poisonous substances have been damaging the municipality’s marine resources. They also noted lapses in MPA management and financing over the past years. To respond to this, the team plans to launch a Community-Based MPA Management Program that will directly involve fisherfolks in protecting the municipality’s marine resources.

Known to be the home of the Largest Continuous Mangrove Forest in the country, Del Carmen has 4,871 hectares of mangrove forest cover and 44 mangrove species. Since 2010, Del Carmen, through the leadership of Vice Mayor Alfredo Coro, has launched marine conversation programs that resulted to 100% illegal mangrove cutting reduction and 95% illegal fishing activities reduction as of 2020.

Together with Ms. Maria Meliza Tuba-Principe from the Ayala Corporation, Vice Mayor Coro targets to introduce sustainable financing mechanisms in the municipality to support the continuous implementation of marine conservation programs and the development of ecotourism. 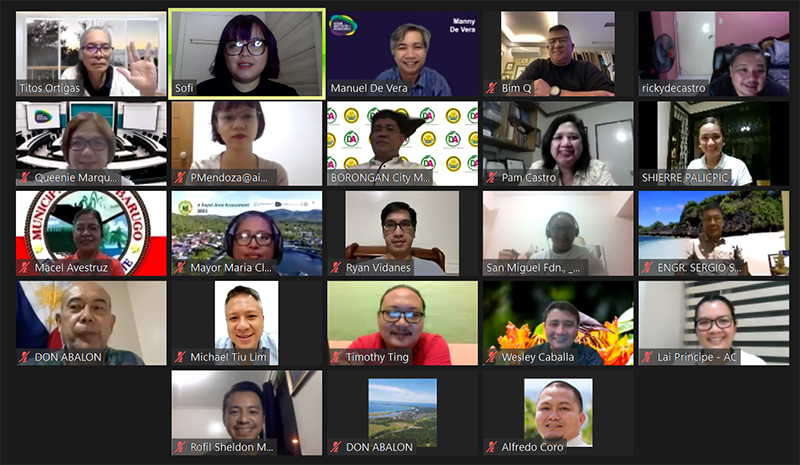 BLICR fellows, faculty, and coaches during the RAA presentations.

With 11 kilometers of coastline facing the Carigara Bay, Barugo was one of the municipalities that were severely damaged by the Typhoon Haiyan in 2013. Mayor Maria Rosario Avestruz has then initiated programs to strengthen the municipality’s coastal resilience. However, due to the COVID-19 pandemic, funds allocated for Information Education Campaigns (IECs) and other activities for marine conservation were diverted to health crisis response.

Mayor Avestruz, together with Mr. Wesley Caballa, aims to jumpstart a Mangrove Rehabilitation Program for the Carigara Bay through the BLICR Program. Having already established the Carigara Bay Alliance, Mayor Avestruz seeks to revitalize intermunicipal collaboration for coastal preservation in her area.

Taking pride in its white sand beaches and diving spots, Sipalay City has conducted broad environmental conservation programs over the past two decades. The Department of Tourism (DOT) Western Visayas has recognized the coastal city as a Top Sustainable Destination.

Seeking to boost further the city’s ecotourism potential, Mayor Maria Gina Lizares, together with  Mr. Bonar Laureto of the Business for Sustainable Development (BSD), plans to set a Local Conservation Area (LCA) in Barangay 5. Currently, the selected area only has 3.05 hectares of mangrove forest although it has extensive coastline facing the Sulu Sea. Mayor Lizares will provide housing relocation and alternative livelihood for the 17 families living in the LCA.

Being located at the central part of Surigao Del Sur, Bayabas is rich in mangroves, corals, and sea grass. However, in a survey of 285 community fisherfolks, the group of Mayor Maria Clarita Limbaro, Mr. Ryan Vidanes of RD Foundation, and Ms. Janice Dugan of First Gen Corporation reported that 62% of the respondents have experienced decrease in fish catch over the past years. Some of the identified causes are illegal fishing activities, increase in storm surge incidents, and sea level rise. 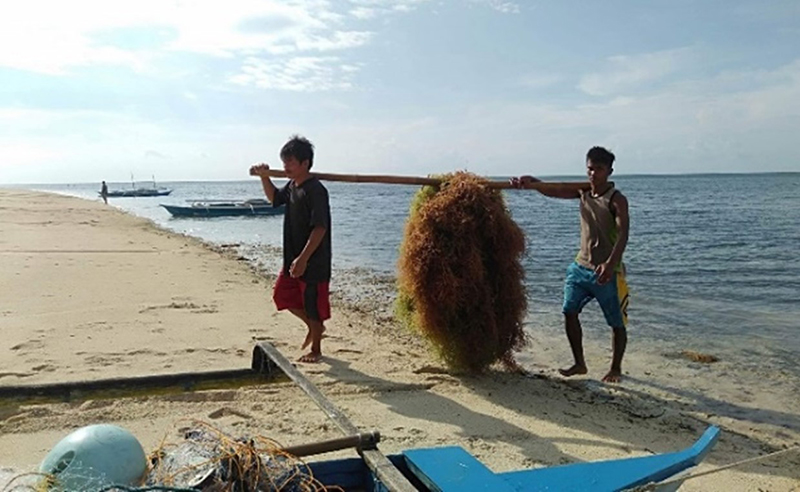 To reverse the decrease in fish catch, the group plans to launch the Greensilient Program which will employ a Tri-Ecosystem Approach and initiate marine conservation activities for mangrove, coral, and sea grass ecosystems. The program will also deploy technology such as GIS, Open Data Kit, and Kobotoolbox for research and development, and equipment such as CCTV cameras, automatic rain gauges and Early Warning Systems for monitoring.

Regarded as the Power Capital of Southern Luzon, Pagbilao serves as base of the 735-Mega Watt coal-fired thermal powerplant of the Tokyo Electric and Marubeni (TeaM) Energy Corporation. Pagbilao has maintained its rich marine biodiversity over the past years and is home to 48 mangrove endemic species in its coastal waters and rivers.

Mayor Shierre Ann Portes-Palicpic, together with her partners Mr. Max Ventura of the Philam Foundation and Ms. Cristina De Leon of the Bechtel Corporation, seeks to expand Pagbilao’s mangrove conservation efforts by establishing a Mangrove Nursery Hub where seedlings of its 48 mangrove endemic species will be incubated and reproduced for plantation.

San Roque has two main river systems that flow towards the Bantayan Bay: the Bantayan River and the Laongan River. In their field assessment, Mayor Don Abalon and Ms. Camille Buenaventura of San Miguel Foundation found that human activities such as the fisherfolks’ use of fine fishing nets that eliminate mangrove propagules from the rivers, fishponds construction, and the illegal cutting of mangroves have caused the decline of mangroves in the river systems.

Responding to this, the pair targets to launch a Mangrove Rehabilitation Program through which community locals will be given alternative livelihood by being hired as stewards or rangers in the mangrove forests. Mayor Abalon also plans to pass more legislation that will promote the incentivization of mangrove conservation activities by community locals.

Being the provincial capital of Eastern Samar, Borongan City has a total population of 69,297 people as of the 2015 census. Facing the Pacific Ocean, the coastal city confronts the challenge of strengthening its climate resilience through reforestation, wildlife and biodiversity management, establishment of MPAs, and solid waste management.

In their field report, Mayor Jose Ivan Dayan Agda and Mr. Rofil Sheldon Magto of Globe Telecom Inc. noted that in one (1) collection day last February 20, the city garbage truck gathered 106.4 kgs of e-waste from households and commercial establishments. Thus, the pair plans to launch an E-Waste Management Program that will facilitate capacity-building activities and establish a Community-Based Recycling Facility in the city.

For more information about the BLICR Program and other offerings of AIM TEC-BL, you may contact teamenergycenter@aim.edu or visit their website at go.aim.edu/bridgingleadership.

This website uses information-gathering tools, such as cookies, web analytics, and other similar technology. By using this website, you consent to the use of these tools.